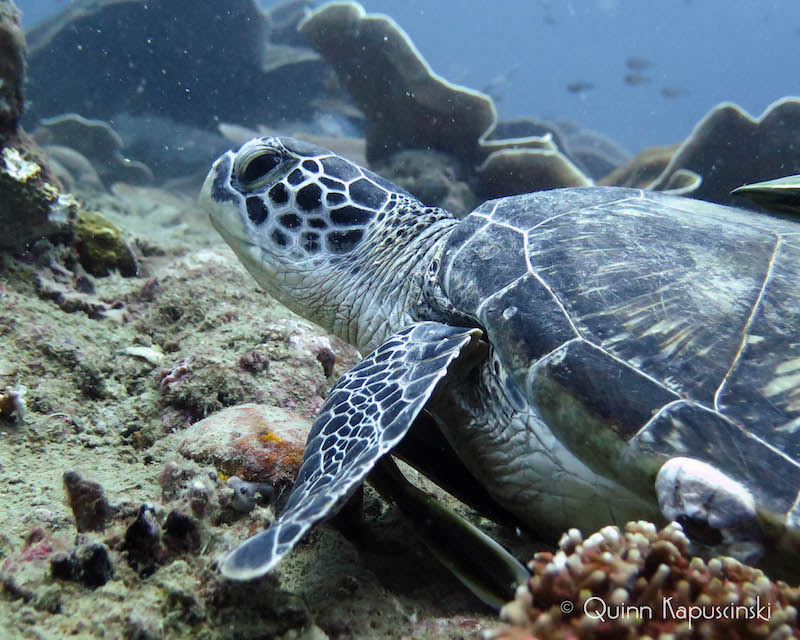 Dive enthusiast? You’ve probably heard of the famous World War 2 wrecks hidden beneath the crystal clear waters of Coron in Palawan, Philippines. This week, we’ve got an expert to shed some light on what exactly you’ll find, plus the certification levels you’ll need for ten of the best diving spots in Coron. Let’s take it from Quinn Kapuscinski from the Busuanga Bay Lodge Divers to tell us all about it!

This Japanese oil tanker is the largest shipwreck in the area, with a total length of 160m. With some parts of the large tanker sitting in the shallow end (10m) and other parts resting as deep as 26m underwater, Okikawa sits perfectly upright and is mostly structurally sound, with the exception of its bow.

Certification level: Open Water and up

One of the two Japanese Imperial Navy ships in the bay, the Akitsushima’s main job was as a sea plane tender and repair vessel. Loaded with military weapons and equipment as well as a massive crane, this large vessel is a must-see.

Another interesting fact: No one has ever discovered what happened to the sea plane the ship was tending to during the time of the attack, and it remains one of the most interesting mysteries of the bay!

This ammunitions supply vessel was involved in countless battles during its time in the Navy, and incurred multiple aerial and submarine attacks before it was sent to the refugee fleet headed to Busuanga.

Kogyo Maru now lies on its starboard side in 34m of water, with a minimum depth of 16m. It is also home to some of the most abundant schools of fish in the bay!

Built and designed for the Japanese Imperial Navy in 1940, the Irako is the second largest vessel in the bay, measuring 145m long. Its main purpose was as a mobile-sea-worth refrigerator and food warehouse, making it a vital part of the navy, bringing food to the forces.

It is home to some of the most incredible artefacts in the Coron Bay area, as well as abundant schools of juvenile barracudas, jackfish, and damsels. You can also find many lion and scorpion fish around this diving spot in Coron as well.

The Olympia Maru is another large cargo ship, measuring 130m long, and was used to carry extremely heavy equipment such as airplane parts, trucks, ammunition, troops, and more.

While never really involved in the Japanese naval war operations, the Olympia was a key player in transporting people and gear, making it a one-stop-shop for any repairs needed.

Certification level: Advanced Open Water certification is required as the minimum depth is at roughly 20m.

As the oldest ship in the bay, the Ekkai Maru has had a long and interesting history. Built in 1904 in Greenock (UK), it was originally used for transatlantic voyages from Europe to America, bringing immigrants to new land.

After a decade, it was sold as a riverboat steaming up and down the Amazon River before being sold again to be used by a banana trading company in Honduras. (It was during this time that it got its name ‘Morazan’.) It was then sold to a fruit trading company in Shanghai, China before being converted to a passenger cargo ship by the Japanese.

One of the most colorful ships in the bay, the Lusong Gunboat was a converted fishing trawler that was used as an auxiliary submarine chase, carrying onboard depth charges, sonar equipment, and more. Sitting in 12m of water and actually breaching the surface slightly during low tides, it offers a miraculous infrastructure for coral growth and marine habitation.

The area just adjacent to this on the west side of Lusong Island – aptly named ‘Coral Gardens‘ – is an incredible reef wall maxing out at around 16m and is just riddled with incredible stag horn corals, Gregorian fans, nudibranchs, juvenile barracuda, turtles, and more.

Certification level: The Lusong Gunboat requires a basic PADI Discover Scuba Diving certification level or higher, since it is very shallow. However, the Coral Gardens are recommended for Open Water certified divers or higher as there is nowhere for DSDs to sit without breaking corals.

Seeing as the wreck is quite small, it gives divers the perfect opportunity to explore every nook and cranny.

Barracuda Lake is one of Coron Island’s fantastic natural phenomenons. Here, the combination of a deep underground hot spring surrounded by small passageways to the sea have caused an incredible crystal clear lake caged in by towering limestone cliffs above and below the surface.

Due to this mixing of hot fresh water and saltwater from the sea, a strange blurriness in the water (similar to seeing a heatwave up close) occurs. So if you’ve ever wanted to know what diving in a bathtub would fee like, this is your chance!

What to see: Between the epic limestone formations, the crystal clear waters, and the natural phenomenon, Barracuda Lake is certainly a bucket list dive for a lot of people.

Similar to the Lusong Gunboat, the Teru-Kaze Maru (better known as the East Tangat Gunboat), was another converted fishing vessel that was also used as an auxiliary submarine chaser.

What differentiates the Teru-Kaze Maru from the Lusong Gunboat was that it carried more military weapons and machinery. Located near Tangat Island, the landscape is stunning and the wreck itself offers a good combination of wreck and reef that attracts all sorts of critters and divers alike. Definitely a diving spot in Coron you shouldn’t miss!

Located off the coast of Barangay Concepcion in Western Busuanga, this island is home to some of the largest coral congregations in Coron Bay. An easy going drift dive can bring you from the north side of the island to the south, all of which are home to beautiful marine life and unsuspecting friends like the Napoleon wrasse that sometimes show up in small schools.

Whether you’re out there for a dive or just hanging out on the beautiful beach under the shade of the trees (or both!), you’re sure to enjoy yourself around Calumbuyan island, one of the beautiful diving spots in Coron.

Quinn Kapucinski is a Canadian PADI Open Water Scuba Instructor with about 70 diving certifications, 250+ discover scuba diving experiences and about 1800+ dives under his belt. Find out more about him and the Busuanga Bay Lodge Divers on their website and Facebook page.