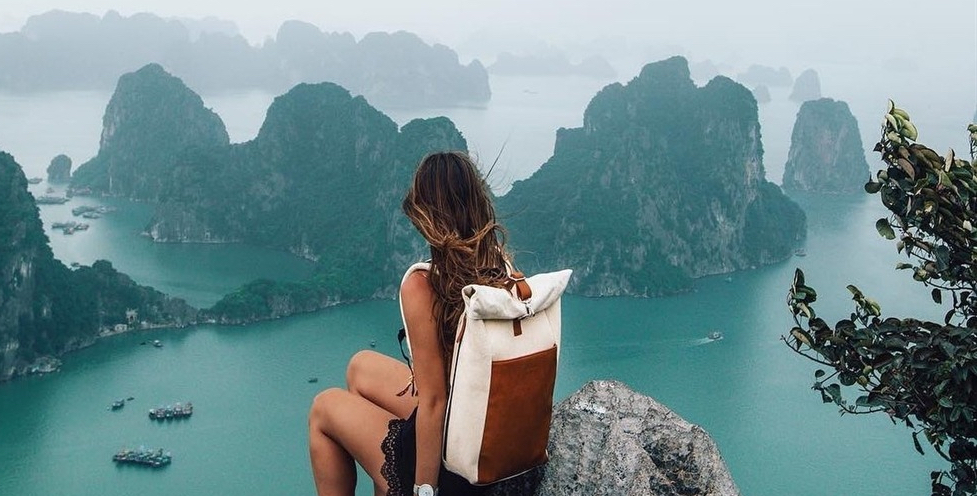 Ha Long Bay is without a doubt one of Vietnam’s most beautiful destinations, despite the stiff competition. Towering limestone cliffs characterize the landscape of Northern Vietnam, with more than 1,600 of these islands jutting out of the turquoise waters of Ha Long Bay.

Due to their craggy nature, there are very few that you can access by foot. But what you can do is take a memorable boat cruise, exploring caves within the islands and kayaking around the bay.

If you’re visiting Northern Vietnam, don’t forget to include Ha Long Bay in your bucket list. With these handy FAQs answered, it’s never been easier to plan a visit:

Where is Ha Long Bay?

You’ll find Ha Long Bay located on the east coast of Northern Hanoi. Driving from the capital takes around 2.5 hours without traffic. Some travellers visit Ha Long Bay as a day tour from Hanoi, but we think that’s a lot of travel time for such a short time on the boat, especially as it takes a while to sail from the harbour to the heart of the bay. What you can do instead is go on an overnight tour and explore other areas such as Lan Ha Bay as well. (Two birds with one stone, right?)

Is it best to visit Ha Long Bay with a tour?

Yes. Price-wise, you won’t save money by traveling to Ha Long Bay from Hanoi independently. Prices in Hanoi travel agents are competitive and you can bag some bargains. Most packages include pick-up, travel from Hanoi to Ha Long Bay, 1-2 nights aboard a ‘junk boat’, three meals a day, activities, and return transport from Ha Long Bay to Hanoi.

If you travel independently to Ha Long city where boats depart, you may end up haggling for in-demand last places and pay similar to what you would have done in Hanoi, minus transport costs.

How can I travel to Ha Long Bay by myself?


Taking a bus or mini-van from Hanoi to Ha Long takes a little longer than driving because of stops and rest breaks. You can expect the journey to take between 3 to 3.5 hours. Another option for traveling between Ha Long Bay and Hanoi is catching a bus to Hai Phong, then a train to Ha Long City. This journey will take you around 4 hours.

Alternatively, you can fly from Hanoi to Tuan Chau Island in 1 hour via seaplane, arriving right in the middle of the bay.

What is there to do in Ha Long Bay?

There are plenty of things to do after traveling from Hanoi to Ha Long Bay. There are opportunities for snorkeling, swimming, visiting eerie caves and exploring Cat Ba Island, one of the largest landmasses nearby. There’s a small city here, as well as an island viewpoint and collection of temples.

How do I get from Ha Long Bay to Hanoi?

If doing the trip in reverse, it’s fairly simple to travel from Ha Long Bay to Hanoi. Travelers arriving from a cruise into the harbor can catch a taxi to the nearest train or bus station in Ha Long City and board a direct public bus or mini-van to Hanoi. There’s also the option of taking a train that ends in Hai Phong, followed by a local bus. Neither option will cost more than VND300,000 (US$13) or so.

Is it possible to travel directly from Ha Long Bay to Sapa?

While there’s no direct journey available from Ha Long to Sapa, it’s possible to depart Ha Long and travel to Sapa the same day, connecting via Hanoi. If you book your tours with the same company, they’ll collect you from Ha Long Bay, bring you to their Hanoi office to shower and regroup, then to the Sapa night bus station. You’ll arrive in Sapa less than 24 hours after waking up in Ha Long Bay. If you’re short on time, this is a great option to see the best destinations in Northern Vietnam.

We hope these have answered any questions you have about visiting Ha Long Bay. Got any more questions about traveling from Hanoi to Ha Long Bay? Leave us a holler in the comments! Safe travels and enjoy your trip to Ha Long!