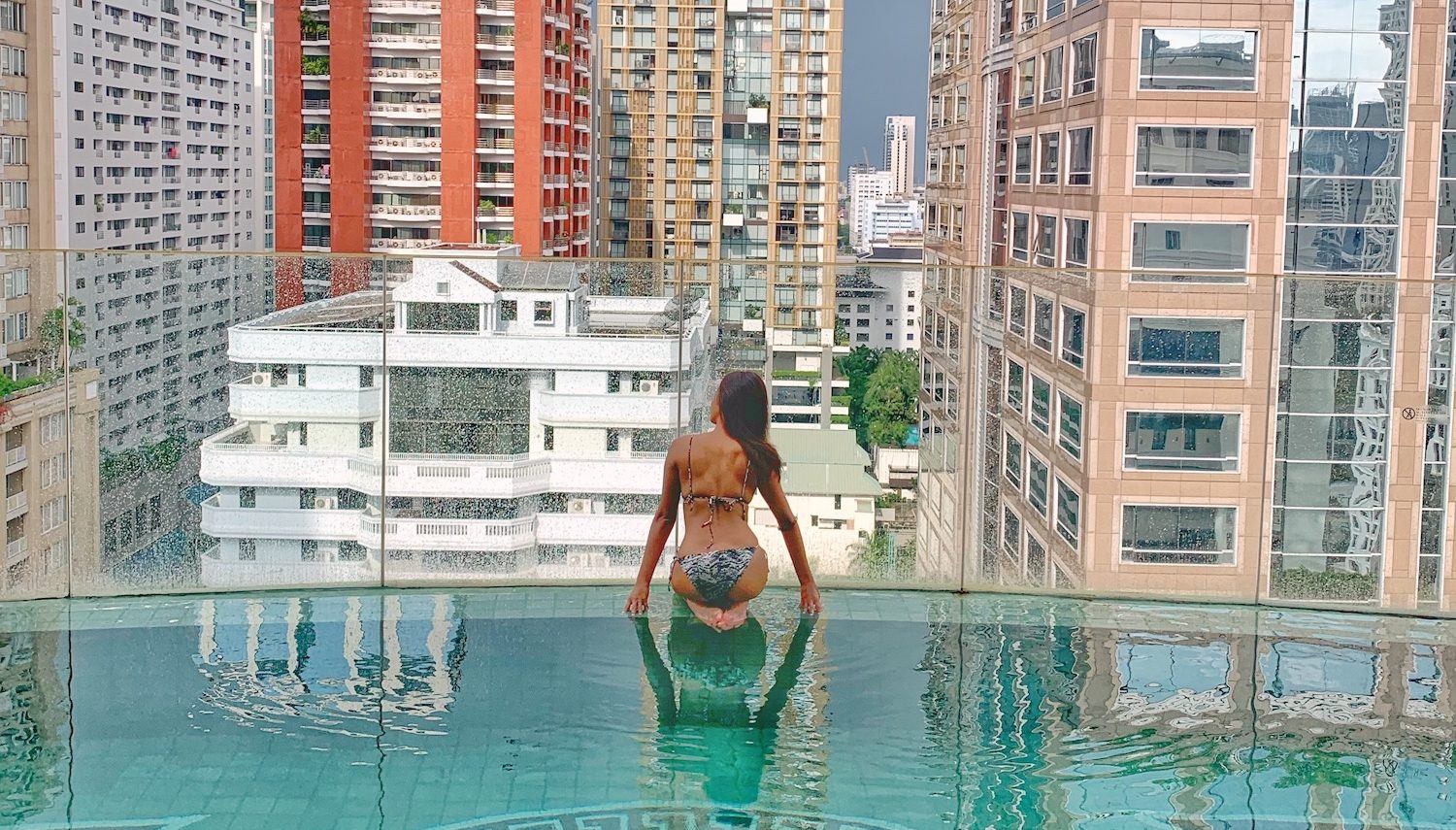 Last month, my cousin Cath celebrated her bachelorette in Bangkok. Why Bangkok? It’s near enough but super different from Manila and Hong Kong; there’s so much to sightsee, the food is delicious, and there’s a lively nightlife scene!

The girl cousins all flew into Thailand’s capital for a weekend to send off Cath’s single life before she ties the knot in January. This was how it unfurled…

Everyone arrived on Friday and settled into our hotel: the Hotel Muse Bangkok Langsuan, part of Accor’s MGallery Collection. Some of us came by GrabCar, while others by the super-convenient train from the airport. Check out transportation options on this Bangkok guide.

Friday was all about settling into the city and decompressing from the 3 or 4 hour flight from Manila / Hong Kong. We held our pajama party in the bride-to-be’s suite and played games. One was a quiz in which we asked the bride questions that we had already asked the groom. We were comparing answers and it was hilarious to hear different sides to the story for questions like, “Who said I love you first?” or “Who made the first move?”

We also checked out our hotel’s rooftop bar, The Speakeasy (before changing into our pajamas of course!). It’s a fantastic place to watch the sunset overlooking Lumphini Park.

We turned in early that night because we had an early morning ahead of us: a 2-hour drive to the Damnoen Saduak Floating Market.

Our itinerary that day was comprised of the Damnoen Floating Market & Maeklong Railway Market. It took longer than we thought to get to the floating market, so unfortunately some shops had closed by the time we arrived. It didn’t matter though, we weren’t there to shop; prices are exorbitant for retail here anyway. You’d best go to one of the in-city shopping malls or markets for better deals.

What you should do though is come with an empty stomach because it’s incredibly fun to feast at Damnoen Saduak! Yes, it’s super touristy, but we enjoyed bargaining and buying delicious Thai treats off passing boat vendors. We enjoyed the fresh fruit; mangoes green and yellow, satay skewers, coconut ice cream… a totally different way to take your breakfast!

Be careful of bargaining for your boat ride upfront though, because Thai people are super business-minded and drive a hard bargain (read: potentially scammy). They were trying to charge people THB6,000 per boat, which is more than double the price of what it should be! If you’re traveling with a reliable tour operator, they should have handled the pricing in advance for you and saved you the stress of haggling if you’re not into that.

Our next stop was yet another ‘tourist trap’ that we enjoyed anyway. It was the Maeklong Railway Market where we saw the train pass and all the market vendors scrambling to close their awnings. (Tip: Try to find a better viewing spot than we did, NOT right by the station, or actually ride the train for a better view).

It was scorching hot by this time and we were all melting, so we jumped into an air-conditioned cafe and ordered mango sticky rice and iced drinks to cool down.

We headed back to Bangkok and tried to visit a temple after this, but were turned away for wearing shorts. Oops. Remember, the Thai holy places are super strict about covering your shoulders and knees – and some don’t even accept shawls or wraps!

If you’re looking for alternative places to go if you’re not in temple attire, check out this list of free things to do in Bangkok for ideas. Honestly, I wanted to go to Lumphini Park or the Jim Thompson House Museum, but I was vetoed.

That night we split into two teams and played dare bingo. This means we had to execute dares based off a bingo card with cells that had dares written on them. Think ‘high five a stranger’ or ‘breakdance in public’. ‘Act like you’re drunk’ was the easiest and ‘do a split’ was literally, physically impossible for any of us in our team. Who put that in there?! We lost by default. I tried my best, though. It kinda hurt.

We had dinner at Taling Pling, an absolutely delicious, classy yet affordable restaurant in a beautiful space. Not trendy, fun or buzzing though if that’s what you’re looking for – just honest to goodness yummy Thai food. It’s also near Sing Sing Theater nightclub if you want to go dancing after. Unfortunately, it closed at midnight that day because of the late king’s death anniversary.

The Drag Show at The Stranger Bar Bangkok was the highlight of the night. I mean, this is the home of ladyboys after all! It’s located on a super seedy street but we didn’t feel harassed at all… you won’t be unless you’re a straight guy.

They do a few shows per night so if the place is bursting when you arrive, just order a drink and wait out the next set. If you really want to get a seat, try to get there by 9:00pm. Otherwise, dance to the performance and music and be prepared for some elbow jostling. (Pro tip: Bring small bills to tip the drag queens after each performance to add to the enjoyment! You WILL be shamed for THB20! Entrance is free but you might have to buy a drink, which I think is fair enough.)

Some of the performances were meh but one was absolutely incredible, by Thai Rihanna. I was floored by her talent, and she did a bouncing split at the climax of her impressive dance set. Wish she had been on my team during the bachelorette games…

We had originally wanted to visit Ayutthaya that day, but some of us had to fly in the evening and didn’t want to risk potential traffic to and from the UNESCO site. So instead we settled for the Grand Palace which was architecturally astounding.

It closes at 3:30pm and one could easily spend three hours covering the sprawling grounds. It was scorching hot when we went though; you might want to bring a fan and wear flowy clothes to survive. Remember: cover your shoulders and knees!

After lunch, we all parted ways and my sister and I returned to Hotel Muse Bangkok to chill out and enjoy the gym and pool (possibly Bangkok’s best rooftop pool!) to work off all the food we had eaten over the weekend 😜

Planning a bachelorette in Bangkok? Try these other ‘hen do’ activity ideas: