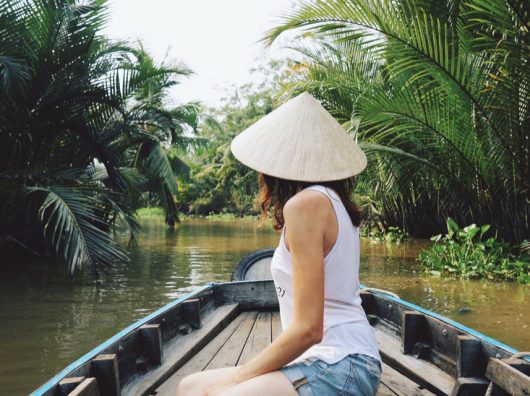 If you’re intent on a trip to Asia but can’t choose between Thailand or Vietnam, let us help you make up your mind. We’re comparing these two amazing countries on several criteria to help you settle your Thailand vs. Vietnam debate. But hey, if you can, we highly recommend visiting both countries! They share a long border and have great access between the two. If you don’t have time, allow us to help…

Because let’s face it, your stomach is an important organ that probably has a huge say in everything that you do, right? Here’s the Thailand vs. Vietnam breakdown for all the foodies out there:

Thailand: This country’s cuisine is vast and flavorsome. From Bangkok’s eclectic food scene with popular dishes like pad thai, tom yum, som tam, and more, to Chiang Mai’s moreish favorites which include all-stars like khao soi, sai oua, and nam prik ong, you can expect a lot of delicious noodle dishes, curries, and hearty soups.

Vietnam: You won’t run out of places to eat in Vietnam, no matter where you go. Whether you’re situated in the Ancient Town of Hoi An, strolling through the capital Hanoi, or have made your way down south to Ho Chi Minh, zesty-yet-smoky food choices like banh mi, pho, banh xeo, cau lau, bunh cuon, and bun cha are just a few you can start out with. Yes, there are still a lot of noodle dishes, but also dumplings, rolls, and fried pancakes.

2. Moving on to the attractions, the sights, and the scenery

Besides the food, you’re probably also wondering what tourist attractions or activities each country is known for. Should you go temple hopping and market strolling in Thailand? Or maybe you’d like to visit the war-ridden remains and preserved French colonial structures in Vietnam?

Thailand: We’ll be honest, this one’s a tough one because what doesn’t Thailand have? They have it all! An excellent shopping scene, beaches galore, cultural temples you won’t find anywhere else, and more. You can visit Bangkok and go on a temple tour, visit northern Thailand and pass by Chiang Mai and Chiang Rai, you can even fly to Phuket and the surrounding Thai islands for some R&R. They’ve also got a hip festival scene to put on the radar.

Also read: 20 Ideas for Unique Things to Do in Bangkok, 15 Chiang Mai Things to Do to Keep You Moving, and How to Spend 72 Hours in Northern Thailand

Vietnam: To us, Vietnam’s greatest draw are its central cities. Hanoi and Ha Long Bay are classics, as is Ho Chi Minh to learn the valiant people’s history in the many museums around the area. But don’t miss out on Da Nang, Hoi An, and Hue where you’ll see sites like the Marble Mountains, Hoi An’s Ancient Town, and the famously Instagrammable Golden Bridge.

Also read: Top 10 & Ultimate Guide to Da Nang, Hoi An, and Hue and A Guide to Hanoi’s Lesser Known Attractions

3. But what about transportation?

If you’re asking which country is easier to get around in in terms of transportation, then that’s another tough question. This is because it will depend on the city that you decide to visit. Visiting Bangkok for example means that you’ll have to expect heavy traffic and congested streets, as compared to the lesser known cities of Chiang Rai, Koh Samui, and the like.

Thailand: If you want to experience a cultural ride, then a tuk-tuk through the city is not a bad idea. (Just beware of scams, as tuk-tuk drivers are known for charging impossibly high rates.) We’d recommend joining a tour with a tuk-tuk driver to be on the safer side. Other than that, ride-sharing apps like Grab or even regular taxis or renting bicycles or motorbikes are other options for getting around. Click here to see our comprehensive transportation guide to Bangkok.

Vietnam: Comparable to Thailand’s tuk-tuk is Vietnam’s cyclo. While not as notorious as the tuk-tuk, these bicycle-like modes of transportation are small and can usually only fit one person. In cities like Hoi An (where they don’t allow cars on main roads), it’s one of the main modes of transport. You can also rent bikes or motorbikes, ride taxis, or use Grab.

4. How are the people? Is there a language barrier?

In our experience, Southeast Asia is home to some of the friendliest locals around. That’s not to say that you shouldn’t be vigilant (especially at night, when alone), but you can expect a warm welcome in both Thailand and Vietnam.

Thailand: You’ll find a lot more foreigners and expats in Thailand compared to Vietnam. Since Bangkok is one of the most visited cities in the world, many of the locals are used to tourists and can speak passable English to help you out.

Vietnam: This country is one of the most culturally diverse countries in the world, with a whole host of ethnicities embedded in its people (think Chinese, Cambodian, Laotian, and more). While Vietnam is also a tourist favorite, we found it just a bit harder to communicate than we did in Siam. Don’t worry though, you’ll survive getting around if you stick to the tourist spots. (You can also use Google Translate or other apps to help you out.)

We know you’re tired of hearing it, but this will really depend on where you go and what you decide to do. Visiting an ethical Elephant Sanctuary in Chiang Mai, Thailand for example is definitely more expensive than spending the day at My Khe Beach in Da Nang, Vietnam. However, both countries are relatively cheap when put in terms of transportation, food, and even lodging.

Thailand: A plate of pad thai will cost you about US$3-5, a ride from the airport using the app Grab can cost you approximately US$15, and a night at a moderately-priced hotel can cost you anywhere from US$30-50.

Vietnam: A bowl of pho will cost you about the same (US$3-5), a ride from the airport in a taxi (check out the reputable Mai Linh taxis) can cost you approximately US$10-15 to the Old Quarter, and a night at a moderately-priced hotel can cost you anywhere from US$30-60.

We have to reiterate that the numbers here are just used to show the average prices as a means of comparison and are by no means set or standard.

Think about what you want to do, see, and eat before you make up your mind. If you think Thailand’s diverse attractions and curry-packed cuisine is more your style, then settle for a week (or more) in Thailand. We recommend Bangkok and Chiang Mai (cities) and Phuket or Koh Samui (beach) for first-timers in Thailand.

If you’re less about the hustle and bustle, then we recommend visiting Central Vietnam and exploring all three cities of Hoi An, Da Nang, and Hue. You can check out our Top 10 Things to Do in Central Vietnam too.

Have you made up your mind yet? Here’s an infographic that helps summarize our points:

So, have we helped you figure out the Thailand vs. Vietnam question? What’ll it be? Let us know in the comments!

10 Must-Do Things While in Istanbul, Turkey